Sunday, Jan 12, 2020. Time to go to Auckland. We boarded the Rotorua City bus for the last time, to get to the central terminal on Arawa street. We had used up all but 40 cents on the bus card, so paid cash for one of the fares.

From the bus station, we had about a 15-minute walk to the AirBnb, which was a studio in a tall building. Merrianne had no internet connection, so couldn’t pull up the check-in instructions, but fortunately, had already loaded the Google map of downtown Auckland.

Outside the building, we looked for the lock boxes for our key. They were not in sight as we stood at the door, but there was a railing going behind a wall perhaps a hundred feet away that looked similar to the picture I had seen on the instructions. Fortunately, I had an image of the lock box in my head (there were dozens on the railing), and remembered the combination. At first, we couldn’t figure out where to tap the fob to open the door, but someone on the street pointed it out to us. It was around the corner from the door. Merrianne remembered that the apartment number was 411B.

Although we were safely in the apartment, we still couldn’t access the checkin instructions. Merrianne had the email from the owner, but that contained a hot link to the instructions, and she had no internet connection. I remembered that the access point was Spark UE8CEF, but hadn’t bothered to study or memorize the password. The email contained the owner’s phone number. We tried to call. My Vodafone gave an error message that it wasn’t a valid number. Merrianne’s AT&T iPhone doesn’t work in New Zealand at all.

n.b. The Vodafone plan I had for 28 days had minimal data. In fact, I burned it all off foolishly in the first few minutes by clicking on the WhatsApp icon on the phone, without finding a wi-fi to connect to, first. That initiated a download of WhatsApp, and triggered a warning from Vodafone that my data was almost used up. I then clicked on the WhatsApp icon again, expecting that to start WhatsApp, but instead, that initiated a duplicate download, and a message from Vodafone that I had used up all my data. (I did get WhatsApp to work later, by clicking on the downloaded file to install it.)

But it seemed that I actually did have a teeny bit of data left. With wi-fi off the Vodafone on, I was able to open the browser and get to Google. So I got to Yahoo Mail on the phone, which was a struggle in itself, given that the phone has no touch screen, and only 12-key input. Tried to log Merrianne in, with the thought that she could click the hot link from mail on the Vodafone, and it would work. Yahoo Mail security said that it would either send a text, or a voice call, to Merrianne’s cell phone. DOH! No service in New Zealand. Or we could choose to get an email. DOH! Can’t log in to her email, because no internet. I decided to try something I had not yet tried – to tether the phone to my netbook, and use a non-wifi source of internet. I got a connection. We couldn’t log into Merrianne’s email from the netbook, either, but I was hoping that I could manually type the link for the check-in instructions into a browser. It said to log in for AirBnb. Merrianne knew her password. It wanted to confirm identity by text, phone call, or email to her Yahoo mail. DOH! Final idea. Use the Vodafone as a wi-fi hotspot, something untested. We had the iPad, and pen and paper, all staged before turning on the hotspot. The iPad connected, Merrianne clicked the hot link for the checkin instructions, and it worked. She was dallying on the pictures in early steps of how to find the lockbox, but I told her to get to the wi-fi password quick. No telling when the mobile data would run out. We got it. Whew. 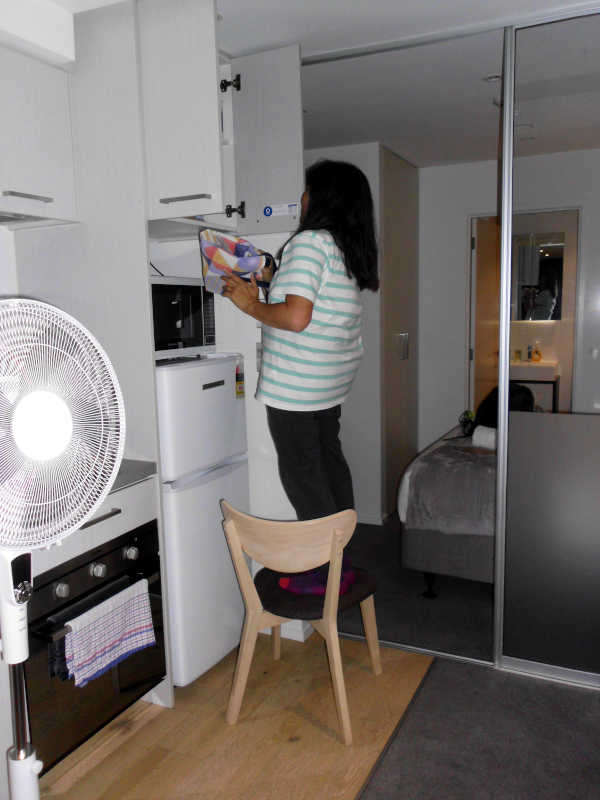 We decided to walk out to get dinner.