The batteries came shrink-wrapped in sets of 4. I immediately noticed how light they were. Lightweight batteries worry me. Years ago, there were very inexpensive rechargeable NiCd D cells, that were really AA batteries encased in a foam shell. Besides the weight, the way you could tell that those were really smaller batteries was to look on the label, and notice that they were marked as 800 mAh or even 600 mAh.

But then again, I had misgivings about lithium when it first came out. It was light, but packed a wallop. I looked carefully at the labels on the UltraFires. There were recycle symbols with “Ni-MH” printed beneath them. And they did say 3500 mAh.  Maybe they were some new technology? I decided to give them the benefit of the doubt.

The batteries actually arrived in a charged state, and I read about 1.31 volts open circuit with my DVM. Then I set the meter to current, and measured a short circuit current of about 3 amps. It was a bit low, but not unreasonable. Besides, the batteries might not have been fully charged. I saw people on the tmart site advising that the batteries should be charged for 16 to 18 hours, so to be sure, I left them in the charger for 48 hours.

I put two of the batteries in my point and shoot camera, and went on a bike ride for Merrianne’s (my wife’s) birthday.

Before the ride was over the camera said the batteries were low. Not good! So I decided to build a tester to see how much capacity these batteries really had. 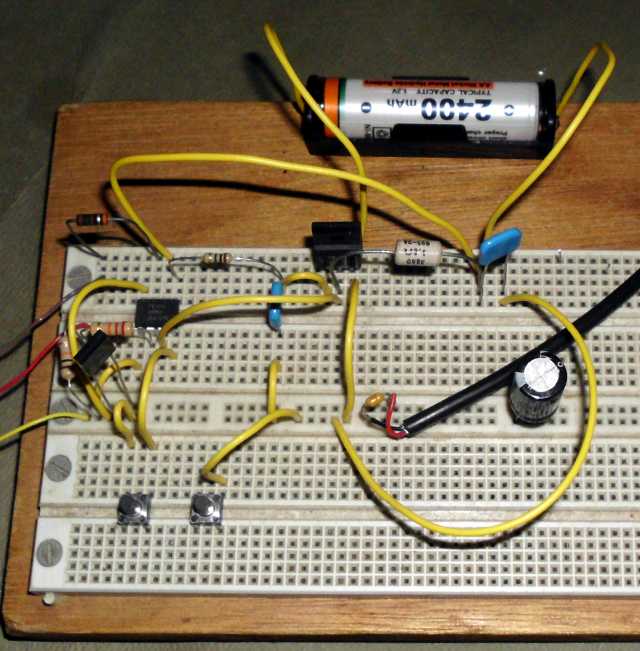 This is one of the rare cases where I’m using a MOSFET in the linear region. My favorite PICAXE processor generates a pulse width modulated (PWM) 4 kHz output, which is filtered by R3 and C3 to create a voltage on the gate of Q1. The processor contains embedded A/D converters, so can monitor the voltage across sense resistor R4, and dynamically adjust the PWM to make the average current constant. C2 is important for stabilizing the battery voltage which would otherwise be noisy. C2 does not dissipate power in theory, so should not disturb the readings.  Each minute, a reading of the battery voltage is sent over the serial port to the pididu.com server, where it is logged into a file for later graphing.

The program I’m using is here.

To make sure the circuit was working, I first tested a Panasonic 2100 mAh AA on my setup. It appeared to have about 17 hours of useful life at a 100 mAh drain, or 1700 mAh. But notice that for batteries, the rating is for milliamp-hours, not watt-hours. So if we look at the time that the battery is supplying 100 mAh, regardless of voltage, we get 20.25 hours, meaning 2025 mAh. Very close to the label rating, and impressive, considering that the battery is not new, but has been in use for about 2 years.

The second test was on an UltraFire 3500 straight out of the charger. The capacity, using the more generous mAh rating, was 626 mAh. Not only did that battery not live up to its claimed 3500 mAh rating, it was a poor AA battery by any standards.

I plan to test a few other batteries, and will report results in a later post.